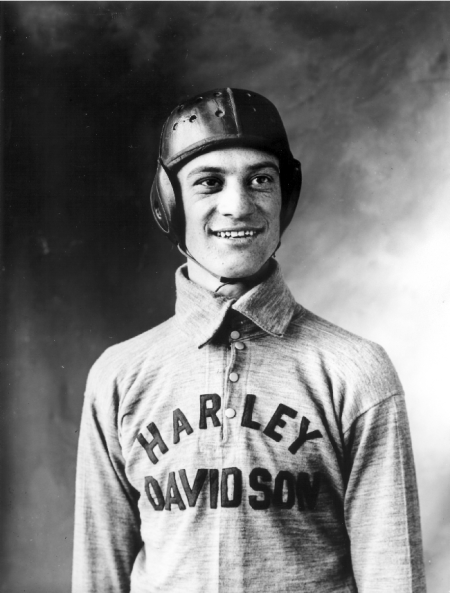 Leslie E. Parkhurst started racing at 13 years old on the Tuileries track in Denver. He went pro three years later, racing in the opening of the Dallas Motordome in 1912. In 1914, while he was racing in Milwaukee, Harley-Davidson asked Parkhurst to test one of their machines. Shortly after, they signed him as the first and, for a while, only member of the Harley-Davidson racing team—the start of what would become the famed Wrecking Crew.

That first season, Parkhurst and the machines he rode were a big attraction at the Chicago motorcycle show and factory visits to Milwaukee. He quickly became a brand celebrity.

Caption: In 1915, the star wooed crowds when he raced a bi-plane at the Wisconsin State Fair.

Parkhurst was typically referred to by his nickname, Red. Perhaps more noticeable than his ginger hair was his signature smile, and “Smiling Red” was a popular moniker as well. Neither his hair nor his demeanor went without comment in most race coverage, and Smilin’ Red was as much a comment on his personality as appearance. Parkhurst was a good-natured athlete whose enthusiasm made him a real crowd-pleaser, both on and off the track.

Caption: 1914 studio portrait of Parkhurst in his racing jersey and helmet.

On the track, Parkhurst was an entertaining rider to cheer on. Part of what earned him so many wins was his tenacity; neither rain, broken pedals, nor catching fire during practice would stop Red from racing. He rode “like a rubber ball” according to one reporter covering an event where Parkhurst fell off his bike but immediately jumped up and continued the race. Speed was another factor. Once referred to as “a veritable demon on wheels,” he frequently set new records while racing. In a 1915 Oklahoma City race where Parkhurst won a prize for the fastest lap, he rode 50 miles holding his tank in place with his knees because it had shaken loose on the rough course.

Caption: Smilin’ Red standing aside while a crew works on his bike at the Speedway Park board track in Maywood, Illinois, in 1915.

Throughout much of his career, Parkhurst was dominating the scene. Donning a Harley-Davidson(R) jersey, Red raced, won, and broke records at some of the most iconic races and tracks of the era, including a 24-hour mileage record at Sheepshead Bay, setting multiple land speed records at Daytona Beach, competing at Ascot Park following the end of World War I, and winning the first Marion Cornfield Classic.

Caption: This postcard celebrates the Harley-Davidson racing team’s performance at the Marion Cornfield Classic race where Parkhurst, Hepburn, and Walker finished first, second, and third. You can see this artifact, along with Parkhurst’s trophy, on display at the Museum.

Parkhurst was pretty much a full-time racer through 1922, and he continued racing in select events through 1924. When he wasn’t racing, Parkhurst worked for race-adjacent businesses such as Firestone, Gates Rubber Company, Excelsior, and, of course, Harley-Davidson. His positions at HDMC included sales and promotions in the 1920s and civilian government inspector during World War II.

Red was a venerable part of early motorcycle history, so much so that Motorcyclist magazine had him pen a racing retrospective in 1936, and in 1944 Enthusiast TM magazine asked him for advice for new riders coming into the sport following World War II; he was still a celebrated guest of motorcycle clubs into the 1950s. Smiling Red was an esteemed part of early Harley-Davidson history - a friendly face found in our historical timelines and the pages of our own published histories.

“Who is there in the crowd that attends the motorcycle race meet, no matter how disinterested he maybe in the sport, who is not captivated by the big boyish grin of Leslie Parkhurst? One of the veterans of the track, harking back to the old "murder-drome" days, Parkhurst probably has a bigger following in the stands than any other rider.” – Motorcycle & Bicycle Illustrated, February 26, 1920